Test operations for cyclic corrosion require switching between multiple cyclic combinations. At the beginning, it can only be done manually in different test chambers. With the development of technology, the automatic cycle salt spray test has been carried out in a single test chamber. Now Wewon Environmental Chambers Co., Ltd. has developed a circular corrosion test chamber that can meet the requirements of temperature and humidity salt spray in the same chamber. Test Characteristics of Cyclic Corrosion Testing Chamber :
● Acceleration Quality: The simple state of continuous salt spray is changed by alternating cycle of salt spray, wet and dry, So that corrosion not only occurs on the surface of the piece under test, It will also penetrate rapidly into the tested part, accelerate the corrosion degree of the tested part, shorten the test time, and make the test more strict and fast.
(1) In the salt spray phase, the salt spray is sprayed on the tested part, Salt spray solution acts as a corrosive medium, causing electrochemical corrosion, rusting, foaming, or other changes in the measured parts. By continuous spraying of salt spray, the corrosion medium can be kept updated, and the corrosion on the sample surface can be developed continuously.
(2) During the wet and hot phase (soaking, moisture, condensation, etc.), the corrosive medium accumulates on the sample surface through the salt spray phase, From the surface of the sample gradually diffused to the inside of the sample, resulting in corrosion of the sample depth direction｜(3) In the drying stage, as the humidity decreases, the concentration of salt solution on the sample surface increases, causing the surface corrosion rate to accelerate.
● Complexity: The cyclic salt spray test can simulate the real alternation of wet and dry in the atmosphere. Different test environments can be presented due to different combinations of loops, Closer to the real use environment of the tested part, The corrosion state of the tested part in the real environment can be more verified, and the test state is more complex.
The salt spray method was first used to test the corrosion resistance of materials around 1914. In 1939, the test for neutral salt spray was written to ASTM B117 test standard. This traditional salt spray test standard requires the sample to be continuously exposed to 5% salt spray at 35℃.
Although the ASTM B117 test standard has been revised and improved many times over the course of 80 years, However, it has long been considered that the results of the salt spray method are not well correlated with the actual corrosion effect of the samples exposed outdoors. Even so, ASTM B117 is currently the primary standard for salt spray corrosion testing and is widely used for corrosion resistance testing of coatings, military and electronic components.
At present, there are many methods to test the corrosion of salt spray. Each method has its own advantages and disadvantages. Some researchers believe that salt spray conditions are superior to soaking conditions. Some use special electrolytes to simulate acid rain. But most use automated salt spray chambers.
The setting of different exposure temperatures, durations, and exposure sequences is still debated, Therefore, the research on the modification of cycle time and the improvement of corrosion solution will undoubtedly continue. However, for most materials, it is generally accepted that cyclic corrosion test results are more realistic than traditional salt spray. 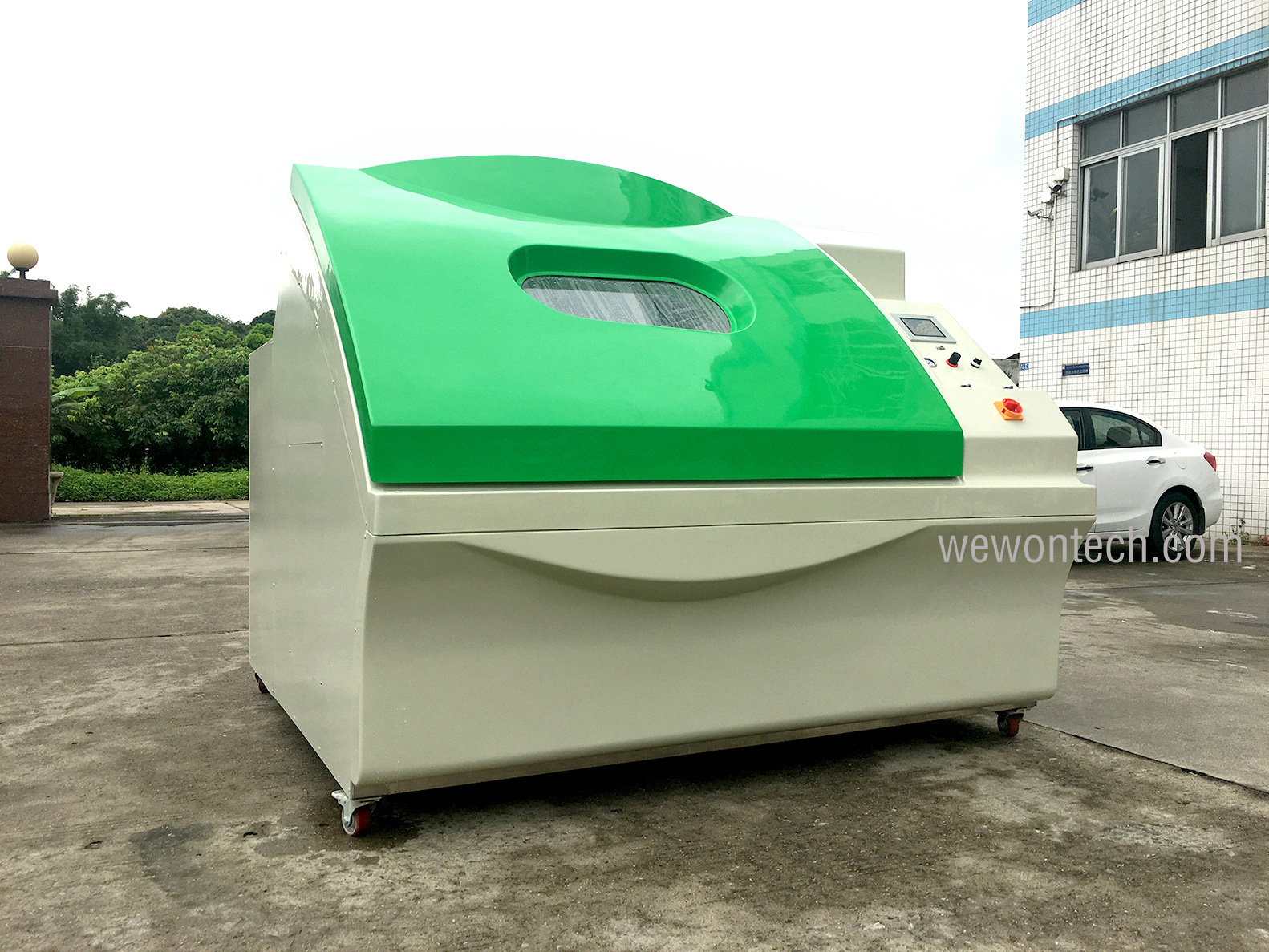 (1) Traditionally, corrosion tests have been called saltwater spray tests, salt spray tests, salt bath tests, or salt spray corrosion tests.
(2) The typical corrosion test method is, Place the tested sample in a stable, saturated relative humidity (RH) environment, And within a certain amount of time, For example, for 999Hrs, 5.20% NaCI solution was used as the condensation salt mist, and the temperature was 35℃ ~40℃
(3) The other method is called the 100% relative humidity method. It is done using water that contains no salt or other chemicals and is often considered a humidity test.
(4) At an early stage, the purpose of the test was to verify the corrosion life. The method is to use the permutation of the degrees of corrosion, Or simply categorize the test as a pass or fail test.
(5 ) However, in reality, no one has actually placed the product in the environmental conditions of 20% brine, 35~40s℃ and 100% RH relative humidity, While there are still many LABS that take this approach, the problem with it is that there is no way to determine the relevance of product service life or end use.

(1) Cyclic testing is an attempt to add some other environmental variables to simulate the end-use environment. In the 1970s, experimental methods were developed for adding dry conditions to the test phase at higher humidity.
(2) This is because it has been found in confirmed observational practice that most corrosion occurs in the process of going from dry to wet or from wet to dry, rather than keeping a test subject wet for a long period of time.
(3) Cyclic testing involves placing the sample in a chamber that can be designed to contain a specific environment, such as a corrosive salt spray.
(4) After the completion of one set of test conditions, The test sample is then transferred to another environmental condition, such as oven (dry and hot), laboratory bench (indoor ambient temperature) or sink (spray, soak).
(5) This reliance on manual sample movement was of course time-consuming and cumbersome, so more advanced test Chambers were invented.
(6) At present, advanced circulation boxes can directly provide the simulation environment needed for various tests of samples, This not only provides a repeatable test environment, but also reduces operator errors, saves test time, and greatly improves the reproducibility of test.
(7) According to the preset combination of simulated test environment conditions, At present, many test boxes have been able to produce more than 11 random cycle environments, simulate a variety of end-use environments, so as to meet customers’ test requirements of more combined environmental conditions.