Standard Operating Procedure (SOP) for IP X9K Rain Test Chamber : Before the test, the nozzle parts inside the IP X9K rain test chamber should be swabbed clean, the nozzle aperture is not big, it is a fan structure, if there are residual objects, will affect the spray effect. In the fixed test sample can be realized through the fixed hole of the sample plate, the sample placement plate has the round hole of tapping teeth, which is specially used to assist the user to fix the sample, which is much better than the general steel tube structure.
After fixing the sample, lock the door of IP X9K rain test chamber. At this point, you can heat the water first. The temperature can be controlled through the setting of the touch screen controller, which is very convenient. After the temperature rises, it shall be set according to the standard time, such as 30 seconds for each nozzle test. During the test, the process of ipx9K rain test can be observed. 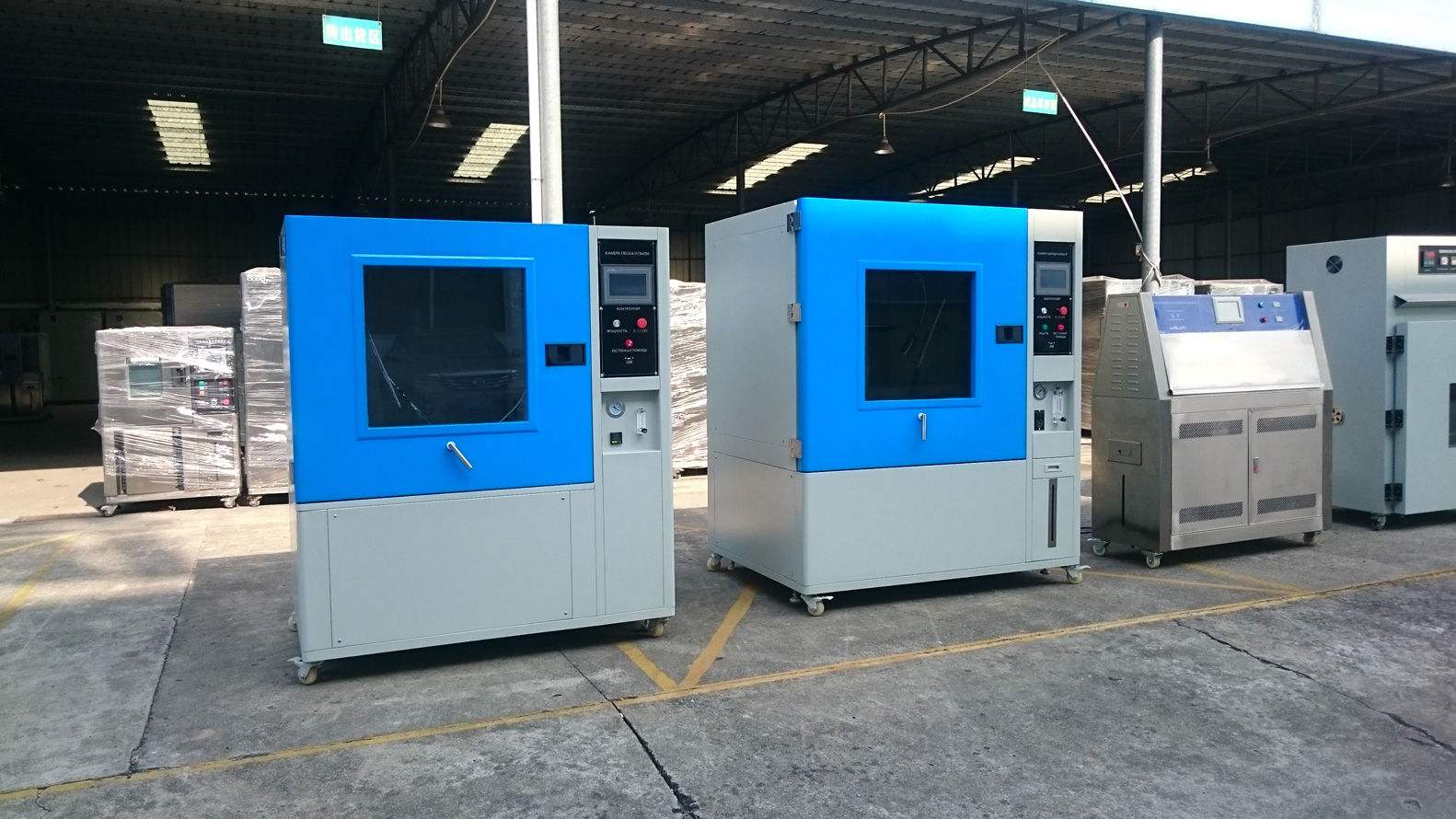 Standard Test Method (STM) for IP X9K Rain Test Chamber : Make the IP X9K rain test chamber of water heated to 80 ± 5 ℃, for small test samples (largest size less than 250 mm), the test parts should be installed in the intermediate position of the sample turntable, the four nozzle and samples show 0 ℃ and 30 ℃, 60 ℃, 90 ℃, spray test time for 30 seconds each.
For large size test samples (maximum dimensions greater than or equal to 250mm), the test parts should be installed as intended. All outer surfaces of the test sample will be sprayed.｜ Injection Direction : Spray from each direction to cover the entire surface of the test samples, and the injection angle should be as perpendicular as possible to the injection surface. The calculated area of the test samples (including any mounting surface) will be tested for a duration of 1min/m ² and a minimum of 3min.

IPX9K rain test chamber is mainly simulated high temperature about 80 ℃, about 10000 kpa pressure steam, to auto parts, outdoor lamps, electronic components, such as rain water impact test. The strength of the flushing can be compared to the automobile cleaning process, the protection of the shell is very high requirements. Therefore, when operating the ipx9 rain chamber, there are some details to pay attention to.
After the test, you should pay special attention to the high temperature of the steam inside the rain-proof test chamber. Please take the sample immediately after opening the door, which is likely to cause damage. Generally, after the test, wait 5-10 min to open the door. IP X9K rain test chamber will comply with the below test standard:
Protection class: refers to the degree of protection provided by the enclosure to prevent the entry of solid foreign bodies or water by approaching dangerous parts to people according to the test method specified in the standard.
Meaning of IP code: the first feature number represents the dustproof level, and the second feature number represents the waterproofing level｜SAE USCAR-2 Performance Specification for Automotive Electrical Connector Systems
IP protection level generally refers to the protection performance of the shell of electronic and electrical products, including dust and water two parts. Dust objects are divided into two types, one is to prevent solid objects into the shell, the sample produced harm, such as some dust into the electrical shell, resulting in electrical components running instability and other conditions.
The second is to prevent personnel in some cases accidentally contact with the live part of the shell, causing harm to the human body, such as children accidentally pointed to the electric fan inside, if the grid spacing of the electric fan can not reach the IP2X level, it is dangerous to children.
The IP protection level only classifies the electrical appliances according to their dust-proof and damp-proof properties. The larger the number, the higher the protection level. A digit indicates the level of dust-proof and intrusion-proof, grade 5 expresses to be able to prevent outside content to invade completely, although cannot prevent dirt to invade completely, but the normal operation that the invasion quantity of dirt won’t affect electric equipment.
The second number indicates the degree of airtightness of the appliances against moisture and water intrusion, and the sixth grade indicates the appliances that can be installed on deck to prevent damage caused by the waves.｜Classification of rain-proof and waterproof in IP protection level: