MIL-STD-202 is a test method and test standard for electronic and electrical components developed by the Columbus National Defense Center in the United States. MIL-STD-202-203 Test Method 203, Random drop test standard is approved for use by all Departments and Agencies of the Department of Defense. This entire standard has been revised. This revision (MIL-STD-202H) has resulted in many changes to the format, but the most significant one is the splitting the document into test methods. See MIL-STD-202 for the change summary.
The MIL-STD-202-203 random drop test is used to determine the effects on component parts of random, repeated impact due to handling, shipping, and other field service conditions. The test is an accelerated test designed to indicate structural and mechanical weaknesses of types not necessarily detected in shock and vibration tests. The random-drop test machine consists of an assembly of either two or four steel cages, with provisions for rotation about a common axis.
MIL-STD 202 establishes uniform methods for testing electronic and electrical component parts, including basic environmental tests to determine resistance to deleterious effects of natural elements and conditions surrounding military operations and physical and electrical tests. It is now known as the international military standard.
● 1st, April 1980 released the MIL-STD-202F version (military standard)
● The MIL-STD-202G version was released on 8th, February 2002,
● MIL-STD-202G w/CHANGE 2 (In Part) was released on 28th June 2013,
● MIL-STD-202H was released on 18th April 2015,
● 21st, Jan 2020 released the MIL-STD-202H (NOTICE-1) version
MIL-STD 202 outlines the suitable conditions obtainable in the laboratory that give test results equivalent to the actual service conditions existing in the field, and to obtain reproducibility of the results of tests. MIL-STD 202 tests are not to be interpreted as an exact and conclusive representation of actual service operation in any one geographic location, since the only true test for operation in a specific location is an actual service test at that point.
The test methods established in MIL-STD 202 for environmental, physical, and electrical tests shall also apply, when applicable, to parts not covered by an approved military specification, military sheet form standard, specification sheet, or drawing. The technical staff from Wewon Environmental Chambers Co., Ltd. can provide guidance in this area to ensure proper testing paths are appropriate. The most current revision of MIL- STD 202, Revision H, replaced Revision G. Updated revisions of the test methods are indicated by a letter following the method number.
How to Use MIL-STD-202-203 Random Drop Test Machine ? The Procedure of MIL-STD-202-203 Test Method 203 Random Drop Test.
The specimen shall be rigidly mounted by the normal mounting means in the steel sleeve so that no part of the specimen, including terminals or external hardware of the component, will extend beyond the sleeve. When necessary, a suitable adapter may be used within the sleeve. End caps shall not be used on the sleeves. Through bolts may be employed as needed to mount the specimens in the sleeve.
Only one sleeve shall be placed in each cage during test. The number of specimens mounted in each sleeve shall be limited only by the available space. Specimens shall be subjected to the random-drop test for a period of 45 minutes at a speed of four to six (4 ~ 6) revolutions per minute. The machine shall be rotated in the direction shown on below picture. 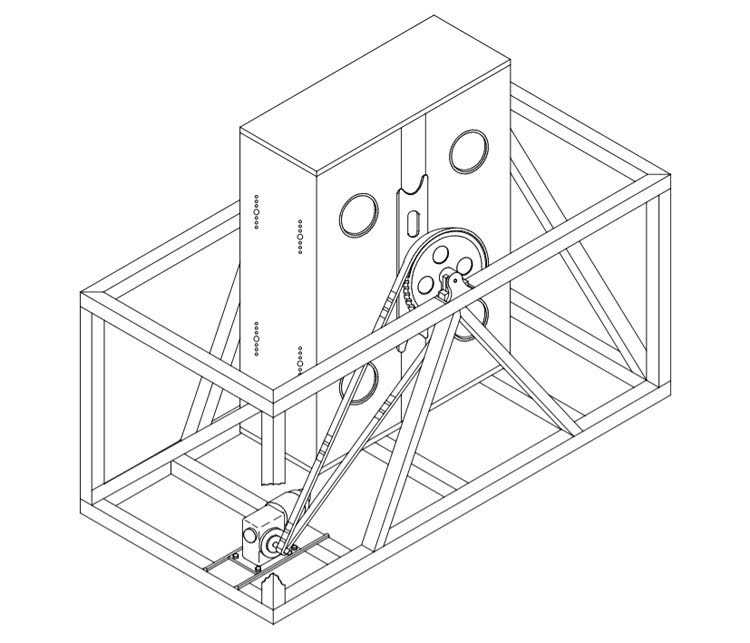